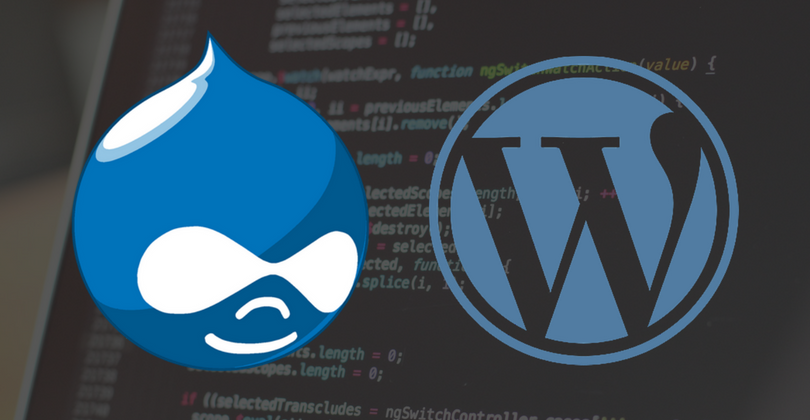 Here we are well into 2018 and you’ve decided it’s time to build a new website for your company, your brand, yourself – and you’re caught between Drupal and WordPress.

Maybe you started out in Blogger and want to get to a real platform. Or, your website is the product of what SquareSpace or Wix provides, and you want more. How do you choose?

One one hand, you’ve heard that WordPress has lots of themes, is easy to use, but has a lot of security issues. On the other Drupal is “better”, but is harder to use. How do you pick?

Let’s compare these two open-source content management systems (CMS) on ease of use, flexibility, cost, security and user experience, and see if a clear winner emerges.

But first, a little history and philosophy

Both WordPress and Drupal got their start at roughly the same time in 2000’s, and both are written in PHP, a scripting language – but there the similarities end. Drupal was envisioned as a website creation engine and able to deliver an entire Web 2.0 site, whereas WordPress was in many ways a reaction to and an outgrowth of Blogging, and to the once-dominant proprietary Movable Type TypePad blog hosting service.

WordPress got its start and its reason for existing from blogging – the then new idea that ordinary people with something to say could create for themselves a “weblog” and publish it on the World Wide Web for all to read and comment on. Blogging is for and about individuals.

Drupal is orientated towards sites that could have thousands of pages and many departments – these tend to be the sites of companies, agencies, non-profits and enterprises.

This difference in orientation – Drupal as an enterprise website manager while WordPress as an individual blogging platform – has coloured the history and development of both platforms. It’s these two different orientations that have to lead to vastly different outcomes when you compare the two, with WordPress the clear “winner” in terms of numbers.

It’s a numbers game, isn’t it?

Comparing WordPress and Drupal numbers; it isn’t even close:

If the numbers are so lopsided in WordPress’ advantage, why are we even having this conversation? Because there’s another number to take into consideration:

All of that WordPress goodness that comes with being first – the multitude of plugins adding functionality and themes providing attractiveness – come at a cost, both in terms of security vulnerabilities and being the biggest target on the block.

Drupal, with its intrinsically more secure modules that do not lend themselves to either themes or plugins, provides more security, but at the cost of ease of use.

While both Drupal and WordPress are free, open-source codebases, buying a particular piece of software is only the first of many costs. There really are several different costs involved in building and maintaining a website:

Development Cost: How much does it cost to go from nothing to 1.0? WordPress’ popularity means there are roughly 10 times as many WordPress themes, theme vendors, plugins and plugin providers and developers as Drupal. And with WordPress, changing themes or plugins is marketed as easy – just activate that new theme or drop in that particular plugin. With Drupal, it definitely takes more and better technical skills to set up a website, Drupal themes are not just “skins” on top of the Drupal core engine, and Drupal “plugins” don’t really exist.

Ongoing Cost: But what about ongoing costs? WordPress template, plugins and themes and core code tend to wrap you in a never-ending embrace of incremental updates, all of which can lead to unexpected system issues and security holes. Drupal, on the other hand, is very stable – there’s not the constant “code churn” that means repeated ongoing costs. Stable can look a lot like rigidity and ossification, especially on the Web when the one constant is change.

It’s easy to forget when trying to pick the “better” technology in general and in the abstract, there’s no such thing: picking technology, like picking nearly everything depends on you.

Are you going to build this site, or hire a professional consultant or developer to build it? Are you going to be spending your Sunday’s updating WordPress plugins and tweaking themes, or will your company, agency, non-profit or whatever be contracting out support for your Drupal site?

And, how important is security to you? Are you comfortable trading reduced security and increased threats of vulnerabilities because there’s’ no real loss other than time, or do you need to build to a higher standard because a single mishap could cost you? Or, your company thousands, tens of thousands of dollars or even endanger the company itself?

There is no one right answer. It’s all about your circumstances, motivations and desires for building a website in the first place.

One thought on “Drupal Vs. WordPress: Which CMS Is Best For Your Business?”